Let's imagine the great city of Alexandria spread out in its whitewashed splendour beside the Mediterranean. It's around the middle of February, 278 BCE.

The superbly designed stone avenue, Boulevard Argeus, stretches southward from the royal palace for stadia. Although sixty cubits wide, it is an ethnic stew approaching the full boil of overflowing excitement under a searing mid-day sun: soldiers with clanking swords on nervous horses; dignitaries in chariots; rich, perfumed matrons in curtained palanquins; bearded Jews with strange hats; black-skinned Nubians; haughty Macedonians in multi-hued chitons; native Egyptians in diaphanous white linens; snorting work elephants; carts filled with tantalizing fruit and vegetables; and official delegations rushing to appointments. Seers, touts, and itinerant street people fight for attention. The city’s normal population of about a hundred thousand has swollen to twice that number in a tidal wave of humanity from countries surrounding the entire Mediterranean. It's the day before the beginning of the first Ptolemaieia, a festival to rival the Olympics with days of athletic and artistic contests to be held in the city's magnificent stadium, known as the Lageion, and theater. Alexandria is the only place to be.

Two weeks later, the event is climaxed. VIP guests of King Ptolemy II and his sister Arsinoe II begin filling the stadium well before sunrise. At the same time, the hordes of commoners and visitors begin lining the city's wide, stoa-bordered boulevards to get the best spots for viewing what is supposed to be the most lavish spectacle ever seen. The excitement is palpable and Ptolemy does not disappoint. 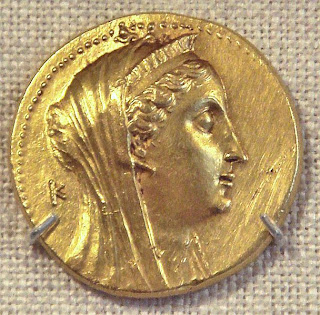 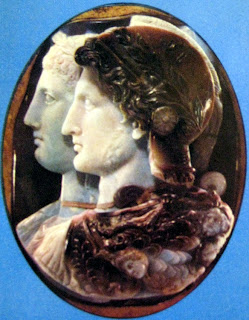 Ptolemy II and Arsinoe II
Just as the sun rises a golden chariot upon which stands a handsome, winged youth representing Eosphorus, the morning star, and holding aloft a torch that glows brilliantly, enters the stadium to a tumultuous roar. After him come official delegations from the competing kingdoms of the diadochi, the theoroi, plus priests and sacrifices to honor all the Greek gods. They first pass beneath the royal box, and bow profusely to Ptolemy before they circle the stadium in a clockwise direction and exit out the porticoes.

Then Silenoi, followers of the god Dionysus, in purple and scarlet himatia run into the stadium to stop the people in the stands from approaching the parade. They are acting as parade "police."

There follow myriads of other representatives and symbols of the god - satyrs holding gilded lamps…people dressed as Nike with golden wings…then more boys in purple tunics…and forty satyrs with gold crowns and painted bodies. Then the god Hermes…then Penteteris, a voluptuous beauty, tall and adorned with quantities of gold. She has a superb dress. In one hand she’s holding a garland of peach blossoms; the other one has a palm branch...more satyrs with garlands of gold ivy leaves. Then actors from the Guild of the Artists of Dionysus...

Now a section of the procession that represents the mythical life of Dionysus - a large wagon with a hundred eighty slaves pulling it by ropes. It holds a tall statue of Dionysus wearing a purple garment. The statue is posed as if pouring wine out of a golden goblet. A canopy shades the entire statue…another statue that represents Nysa, the place in where Dionysus was nursed. The statue moves with no person applying his hand to it...the wagon holding the statue is drawn by sixty men and in it the tall female statue is in a sitting position, clothed in a gold tunic. She stands up on her own, pours milk out of a golden bottle, and then sits down again. She is crowned with gold ivy leaves and holds a thyrsus. A parasol shades the wagon.

Next come over three hundred slaves pulling a huge cart on which is a gigantic wine press full of grapes. Sixty satyrs trample the grapes, singing a song in praise of the wine press to flute music. The bald and fat, drunken tutor of Dionysus, Silenus, presides over them. The newly-pressed wine runs out from the bottom of the cart, leaving a purple trail in the dirt of the stadium track. Then another wagon even larger than the last with six hundred men drawing it. There’s a sack on it of sewn leopards’ skins that must hold three thousand measures of wine. This cart too allows its contents to escape onto the track…and now more bumbling fools—a hundred twenty satyrs and silenoi, all wearing garlands. They too carry casks of wine, bowls, and gold goblets…then sixteen hundred boys crowned with ivy and vine leaves and clad in knee-length white chitons march smartly through the stadium porticoes. They all carry a variety of gold and silver wine coolers. After them, hundreds more boys enter carrying drinking cups. They run up into the crowded seats and offer the entire audience a draught of sweet Mareotic wine, refilling the cups from the coolers as necessary.

More "floats" with statues and scenes follow - a wagon decorated as the bed chamber of Semelê, the mother of Dionysus and another decorated as a large cave, the cave where Dionysus was raised. Live doves and pigeons fly out of the cave for the people to catch by long threads attached to their legs. The cave also has running fountains of milk and wine...another wagon containing a beautifully painted statue of the god riding on an elephant. Sitting in front of him on the elephant’s neck is a satyr crowned with a golden chaplet...then five troops of asses ridden by crowned silenoi and satyri... 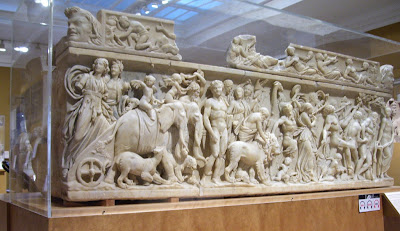 Sarcophagus with Triumph of Dionysus - Marble from the island of Proconnesus, Turkey
Courtesy http://www.flickr.com/photos/jerub-baal/2534611388/
These scenes were depicted in much greater size and with much greater pomp in the Grand Procession, but no artistic renderings exist of the procession.
The next section of the procession is preceded by the singularly unattractive smell of wild animals...twenty-four chariots drawn by four elephants each enter the stadium, clouds of dust surrounding them and covering the spectators on the lower rows of seats...The elephants randomly trumpet, snort and deposit their breakfast on the track, adding to the general stench and mess... then a ridiculous parade of foreign animals pulling chariots ensues—goats, antelopes, buffaloes, ostriches, zebras. Two costumed boys also ride on every animal. Camels carrying spices bring up the rear, but there's much more - huntsmen with thousands of dogs…men carrying trees with birds and beasts of every country…hundreds and hundreds of sheep, Ethiopian oxen, an immense white bear, leopards, panthers, lynxes, caracal, vast numbers of horses, enormous lions, a cameleopard, and a rhinoceros. 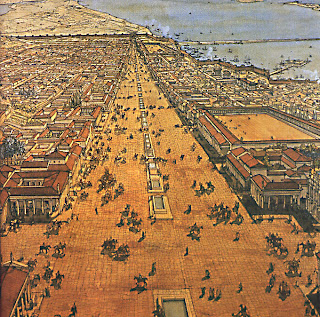 A depiction of ancient Alexandria looking southwest along one of the wide boulevards﻿ (Meson Pedion)
on which the Grand Procession could have travelled
By now it is well into the afternoon and the procession of symbols, floats, and wealth continues with some politically subtle messages of the time - a cart with a large colorfully painted statue of Dionysus flying to the altar of Rhea, the earth mother, being pursued by his real mother Hera. Priapus, his son, stands by him crowned with gold ivy leaves. The second cart contains exquisitely designed statues of Alexander and Ptolemy I, both crowned with gold. A statue of Arête with a gold crown stands beside Ptolemy. Again, another statue of Priapus is with them, wearing a gold crown of ivy leaves. A fourth statue wearing a golden diadem and representing the city of also stands beside Ptolemy. The two carts are followed by women in sumptuous dresses, jewelry, and gold crowns. They all hold signs announcing cities in , , , and islands, all of which were under Persian control before Alexander conquered them.

There follow two chariots with oversize symbols of the cult of Dionysus. The first has a golden thyrsus ninety cubits long and a silver spear sixty cubits long; the second contains a gigantic golden phallus a hundred twenty cubits long wreathed with golden garlands and having on the end a golden star six cubits in circumference. Right after this are three hundred musicians with gold crowns and playing gold kithara enter the stadion. Immediately after, a tremendous dust cloud returns. It precedes the entry of two thousand black sacrificial bulls adorned with gilded horns, gold frontlets, gold crowns in the middle of their foreheads, gold necklaces, and gold breastplates.

The procession must surely be near the end. A magnificently decorated golden statue of Alexander rolls in, borne on a chariot drawn by lumbering elephants, their snouts constantly swinging. Beside him stand statues of Nike, the companion of Zeus and the winged goddess of victory, and Athena, the goddess of war. An ivory and gold throne for Ptolemy Soter (Ptolemy I) is paraded in by slaves. On it is a crown made of ten thousand gold coins. It is followed by numbers of similar thrones, some of which hold crowns and some golden horns, then an obnoxious display of wealth - hundreds of gifts, items of booty, and seemingly useless icons carried in by slaves or creaking, shiny carts. Most of the items are oversized exaggerations of what they represent.

Then a far-off sound begins, faint at first. It grows to a steady chorus of clanging. Bells. Hundreds of bells. The entire stadion rises with the king and looks eastward to the porticoes. Now lumbering through are sixty-four muscular mules, all with golden crowns, golden bells hanging beside their heads, and collars of precious stones. Behind them creak the gold and iron wheels of their burden. As it passes through the porticoes, it reflects the dying rays of the setting sun flashing through the dust. It’s the treasure of treasures, a magnificent golden carriage. The catafalque of Alexander!


Then a deluge of raucous cheers washes over the stadion. “Alexander, Alexander! Praise the king!” They don’t stop. The top of the carriage is a gold vault covered with precious stones and carved reliefs of Alexander’s campaigns. On each corner is a golden figure of Nike holding a trophy. The roof is ringed with finely-carved goats’ heads, gold rings, festive garland, and large bells. A gold Ionic colonnade supports the vault and two gold lions guard the entrance. Its beauty is almost beyond belief.

What appears to be the end approaches as the first ranks of the infantry march in step into the stadium, all in polished bronze breastplates and helmets. They carry sarissas. In ranks of ten abreast, there are 57,600 of them. The infantry is then followed by 23,200 cavalry, all in polished brass with helmet feathers flying. The whole army takes almost three hours to pass through the stadium. It is a truly impressive and intimidating example of ’s military might. At the end, night has enveloped the Lageion as Hesperus, the evening star, rolls through in his golden chariot. Just as Eosphorus did, he holds aloft a flaming torch to signal that the spectacle has ended.

We'll look at what this all means next time.

Posted by Doug Matthews at 5:26 PM