The Opet Festival in Ancient Egypt

Of all the early river valley civilizations— Mesopotamia along the Tigris-Euphrates Rivers, Yangshao along the Yellow River in China, Harappan along the Indus River in India/Pakistan, and Egypt along the Nile—it was only the people on the Nile who coalesced into the world’s first nation around 3150 BCE. remained one of the strongest ancient civilizations for over 3000 years, by far surpassing anything before or since. During that time, art and writing evolved with unprecedented consistency. Thanks to this consistency, extensive archaeological records have made it easy to interpret and reconstruct Egyptian celebration.

Their celebrations centered almost completely on a complex, polytheistic religion. The most prominent and enduring event was an annual spectacle called the Opet Festival in , located in . As with their other contemporary civilizations such as Sumer, the reasons for the festival were distinctly religious ones of rejuvenation and rebirth. Also like the other civilizations, the primary component of the event was a procession.

View Larger Map﻿
Location of Luxor in Upper Egypt
The festival began with offerings made by the Pharaoh to the god Amun-Re in the god's temple in Thebes, today's Karnak Temple. These offerings supposedly rejuvenated the Pharoah's divine power, although the exact nature of the rituals is unknown and this rejuvenation may also have taken place in the Luxor Temple. From the Karnak Temple complex, the Pharaoh and his queen led a procession of the god in his statue form plus the other gods of Thebes, Mut the Mother Goddess, and Khonsu, their offspring. All the statues were borne aloft on small barques carried on the shoulders of temple priests who made their way to the temple dock and small harbour just off the Nile. The statues were loaded onto larger, highly decorated river barges which were hauled by labourers or specially chosen people out the waterway to the Nile where they were towed upriver to the Luxor Temple. Here they were offloaded and a short procession took them into the temple where the second part of the cermony took place, the symbolic divine marriage of Amun-Re to Mut, which was in essence a fertility rite related to the rising waters of the that re-fertilized the valley every year in the spring.
About three weeks later the entire process was reversed and the god's statues returned to the Karnak Temple, this time via a processional land route lined with sphinxes. Throughout the long history of the festival - at least well into the reign of Ramesses III, probably longer -  the routes changed occasionally, depending no doubt on the weather and/or the whims of the powerful temple priests and Pharaoh.

What made these processions fascinating was their magnitude. They also incorporated musicians, acrobats, dancers, the army, charioteers, sacrificial animals - probably thousands of participants in all. The festival itself accommodated at least 80,000 or so onlookers (the approximate population of Thebes in the New Kingdom period) and incorporated a great deal of sacrificial feasting. The statues of the gods, although relatively small, are thought to have been constructed of gold. The Nile barges used for the water processions must have also been spectacular, especially the barge for the god Amun-Re, which has been partly described in a written account of the time. “The gold shrine on deck is inlaid with every costly stone, like a palace; and notice the rams’ heads of gold from front to rear, fitted with uraeus-serpents wearing atef-crowns." 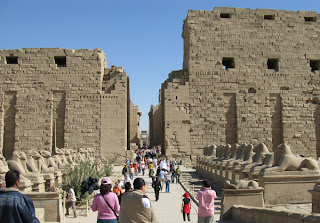 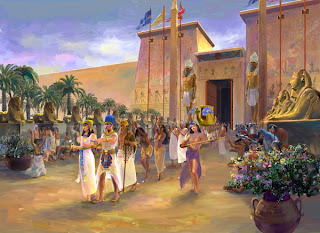 Opet Procession Leaving Karnak Temple in Time of Ramsses II
(Image courtesy of Serena Zhang, http://xiuyuan.deviantart.com/gallery/)
﻿One can get a good idea of the immensity of the festival by visiting the temples of Karnak and Luxor that are still standing today in the city of Luxor. The Karnak temple and surrounding grounds was and still is, the largest religious complex in the world. It was built with the Opet Festival in mind in various stages beginning in the 18th Dynasty period, around 1500 BCE. The Luxor temple was constructed starting about the same time. It is from scenes carved into the walls of part of this temple known as the colonnade by none other than King Tutankhamun, that we know so much about the Opet Festival. 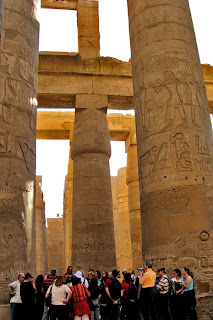 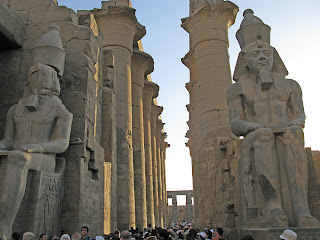 Entrance to colonnade in Luxor Temple 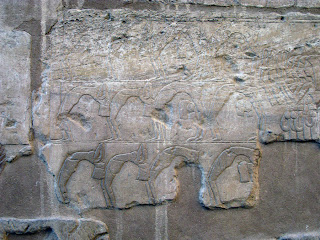 Carved scene of dancer/acrobats participating in Opet Festival, taken from walls of colonnade in Luxor Temple 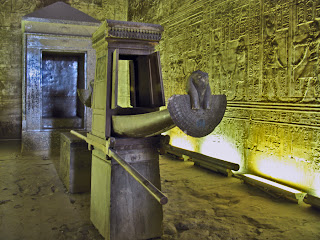 Portable barque shrine similar to one that would have housed Amun-Re's statue and that would have been carried on the shoulders of priests in the Opet Procession
References:

Posted by Doug Matthews at 5:35 PM