I have broken down celebrations - or as those of us who have been involved with the practical end of them, special events - into occasions that "honour, discuss, sell, teach about, encourage, observe, or influence human endeavors." However, to be able to take any meaning from such events, it is a logical conclusion that the human beings involved must understand what the celebration is about. In simple terms, that means that they must understand symbolism and at the very least, simple ritual. In prehistoric times, as now, this trait would be a prerequisite to even having a celebration.
The big question is, "When did this trait and the associated one of innovation, first appear in human behaviour?" To most scientists today, their appearance is interpreted to be the point at which our species utilized a combination of language and the ability to think abstractly or symbolically. This point in time has been termed the “Great Leap Forward” by Diamond and others. A major find such as the symbolic python in the Rhino Cave has now added fuel to the ongoing debate about where and when this point in time occurred, because it has placed such a combination in at the time of the Middle Paleolithic period, 70,000 years ago. This drastically alters previous collective wisdom that placed culturally modern practices in about 30,000 to 40,000 years ago. I have also today tweeted about another find in the Sibudu Cave in South Africa that places such a date in and around 64,000 years ago.
The debate actually began seriously heating up around the beginning of the 21st century with the discovery of snail-shell beads, polished stone tools, and patterned red ochre in the Blombos Cave area of South Africa, dating from about the same period, 75,000 years ago. As well, finds of similar objects have been teased from the soil of various digs to tantalize researchers: a 300,000-to-500,000-year-old figurine from Morocco; three 400,000-year-old wooden throwing spears from Schoningen in Germany; a 300,000-year-old stone hand axe in a pit of Homo heidelbergensis bones in Atapuerca, Spain; a 233,000-year-old putative figurine from Berekhat Ram in Israel; two 100,000-year-old fragments of notched bone from South Africa’s Klasies River Mouth Cave; a 60,000-year-old piece of flint incised with concentric arcs from Quneitra in Israel; and a polished plate of mammoth tooth from Tata in Hungary, dated to between 50,000 and 100,000 years ago. These objects represent the ability of the makers to innovatively transfer meaning to something external. More simply, they represent symbolic thought. Any or all of them may very well eventually lead to different conclusions about the exact location of our cultural genesis.
On the other hand, some scientists tend to believe that the production of obvious art represents the beginning of modern culture. Many of the oldest art objects have indeed been found in . Among these is a number of small, carved animal figures and a carved ivory flute, all dating back to between 30,000 and 40,000 years ago, discovered in southwestern . The famous cave paintings in , discussed in my last post, and lesser-known paintings in and do not show up until slightly later. 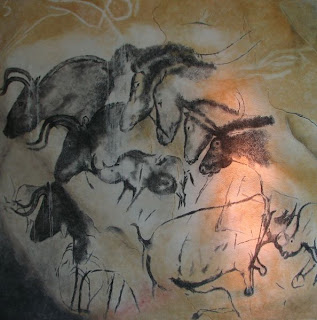 Part of the Chauvet Cave Paintings﻿
Current thinking does, however, seem to be narrowing down to a consensus that the development of symbolic thought was a longer evolutionary process than at first believed.
References:
Posted by Doug Matthews at 4:53 PM