How and When Did Music and Dance Become Part of Human Celebration?

There are numerous unproven theories as to what might have been the instigators of musical behavior. For melody perception and production, one theory suggests it resulted from the pitch variation vocalizations of mothers communicating with infants with the implicit emotion that attached to that communication (i.e., music first–language second concept). Another suggests it might have come from the relationship between pitch and dynamics in speech (i.e., language first–music second concept) relating to the intensity of emotional content. For rhythm perception and production (and obviously dance and drumming), one theory suggests it resulted from the “synchronous chorusing” or the calling of animals for mates, while another claims that mimesis was the beginning. A final theory about the evolution of both melody and rhythm as a combination of music and dance comes from the idea that they acted as a “coalition signaling system” and may originally have been used to coordinate territorial defence signals. What apparently underlies all theories is that musical behavior, including dance, evolved for its social interactive value, and that more than anything is the reason it has survived.

That is the how. The only thing needed now is to figure out when our ancestors acquired the physiological and neurological capacities to undertake music-related action, whether vocal or physical. Specifically, would they have acquired them in time to use them in the ceremony of 70,000 years ago? The figure below is a representation of the possible evolutionary path of human performance, and is based on my own interpretation of the conclusions reached primarily by Cambridge professor Iain Morley. Both he and author Steven Mithen have independently postulated how melody and rhythm have evolved. 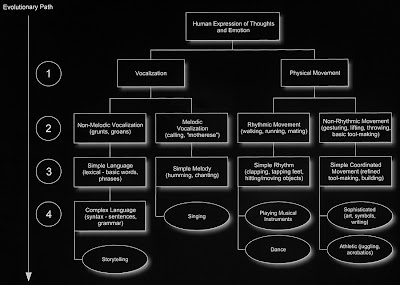 Proposed evolutionary path of human performance (click on image to enlarge)
I begin with the assumption that for archaic Homo sapiens and their hominid predecessors, there are two principal categories available for the early expression of thoughts, namely vocalization and physical or corporeal movement. This would be represented by Level 1 in the figure above. Thus, Level 1 represents a long and unknown period of time from the beginnings of hominids with Homo habilis right up to archaic Homo sapiens. Level 2 would represent a transition period of approximately 100,000 years between archaic and anatomically modern Homo sapiens, who arrived on the scene about 195,000 years ago. As Morley points out, based on his research, they would by this time have begun to use some form of melodic vocalization. On the physical side, we already know that Homo erectus would have been able to walk, run, and make other non-rhythmic movements well before even archaic Homo sapiens.
The next level, Level 3, is approximately where I have assumed our snake worshippers from the Rhino Cave to be in their performance evolution, at the very minimum. Based on the evidence and arguments of Morley and Mithen, by 70,000 years ago they should have at least been speaking in simple phrases, if not sentences; they should have at least been humming or chanting; they should have at least been tapping their feet or dancing in rudimentary form, clapping or hitting objects; and they were probably beginning to make symbols and art. This would seem logical, since over 120,000 years separate this time from the first appearance of fully anatomically modern Homo sapiens 195,000 years ago. The only problem is that there is very little tangible archaeological evidence. To find any, we have to skip to Level 4, a period that I have assumed covers from about 50,000 years ago to 3,000 years ago, or from the Upper Paleolithic to beyond the Neolithic.

Although there is no clear physical evidence of prehistoric singing, chanting, or dancing going back 70,000 years, there are numerous indications of early instruments. Morley has divided these instruments into five categories:
·    flutes and phalangeal whistles (a single-holed bone that creates a single note by blowing over the hole, similar to blowing over the opening of a wine bottle);
·    bullroarers or free aerophones (flat perforated pieces of wood or bone on the end of a cord, which create a whirring sound when spun in a circular motion);
·    rasps or scraped idiophones (pieces of wood, bone, or stone with grooves cut into them perpendicular to their length, which are then rubbed with another object to create a staccato vibration);
·    percussion; and
·    caves and lithophones.
All have been found in and date from 50,000 to 11,000 years ago.

It is these final groups, percussion instruments, caves, and lithophones, that hold the most promise of being the instruments of choice for our snake worshippers. As stated by Morley, “ethnographic evidence shows that among modern hunter-gatherer groups instrumentation is dominated by percussive rather than melodic instruments.… If this were also the case amongst early humans we would be left with very little evidence of it, as these instruments are usually made from wood or skin, which would leave no archaeological trace.” Thus, even if what we know as real drums were used by the worshippers, the artifacts would not survive the elements. Surviving percussive instruments would have to be constructed of more lasting material. He goes on to discuss a 20,000-year-old set of six mammoth bones from the that when struck produce a selection of tones. Further to this are some fascinating recent developments. The concept of lithoacoustics, or the use of stones striking stones to produce music or rhythm, is now under consideration, and there is some evidence to prove that this method might have been used in prehistoric times. Ian Cross of has carried out a preliminary study and has shown that the hypothesis is workable. His current studies have now extended to striking flint blades to produce tones similar to hand bells. Although time periods have not been determined for this type of musical production, it is not beyond belief that, given their physiological and neurological development, our snake worshippers in the Rhino Cave could have used the stone spear points found in the cave to create rhythmic accompaniment to dance rather than for hunting purposes. It is a good case for the first “rock music.”

We'll look at prehistoric "concert halls" in the next post.