What Was The Roman Triumph All About?

The story of Paulus's triumph is taken from the ancient source writings primarily of Plutarch (46 – 120 CE), but also from Livy (Titus Livius, 59 BCE – 17 CE), Diodorus Siculus (1st century BCE), and Polybius (203–120 BCE).[i] As a body of information, they provide the most of any triumph.[ii] However, there are several discrepancies amongst them regarding some of the details, both those included and those excluded. For example, the days on which certain items were carried in procession are different in Plutarch and in Siculus, some of the amounts of booty differ, and whether or not certain prisoners were included is not specified. I chose to speculate about the days items were carried, the amounts, and that there was a large number of prisoners paraded, in order to form a more logical picture of the spectacle.
Below are three figures showing different aspects of the triumphal procession. Figure 1 is my interpretation of the Forum as it was known to be at the time of Paulus. The procession would have followed a path along the Via Sacra from the northeastern corner to the southwestern corner where it curved around the Temple of Saturn and sloped up the Capitoline Hill to the Temple of Jupiter. Figure 2 is a photo from the present day that shows this final hill leading in front of the remaining columns of the Temple of Saturn up to the Temple of Jupiter. One can get a good sense of the scale of these temples. Lastly, Figure 3 is one of several paintings that make up a composite picture of Paulus’s triumph now in the Capitoline Museum in Rome. This particular image shows a group of slaves carrying some of the vessels of gold and silver coin. 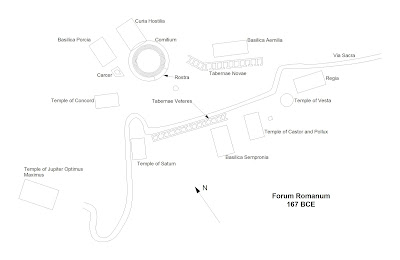 Figure 1: Forum Romanum in 167 BCE with procession route along the Via Sacra up to the Temple of Jupiter 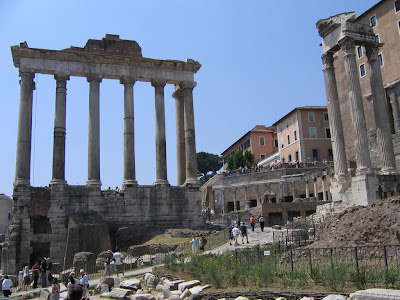 Figure 2: Temple of Saturn as it is today with remainder of Via Sacra leading up the Capitoline Hill towards the ancient Temple of Jupiter (not there today)

What Were the Reasons for the Event and the Message Delivered?

The reason for the triumph has long been debated and there is no consensus on a single one. They range from the triumph as celebration of good fortune to a reflection of how Romans saw themselves, and one scholar acknowledges after lengthy analysis that the “why” question is unanswerable.[iii]
However, previous analyses were done without considering the triangular link amongst the key stakeholders of the event: the organizers, the participants, and the spectators. The owner/organizer of the triumph was in reality the Senate of Rome, of which the victorious general at the time of the Republic was by decree a member and indeed one of two leaders (consuls). With few exceptions, he did not go to war nor was he awarded a triumph without the sanction of the Senate. They had a much simpler reason for the triumph: economic.
From earliest times, Roman victories brought into the country massive amounts of booty and huge numbers of slaves. It was said by Livy, for example, that just the gold and silver coinage from Paulus’s triumph brought in the equivalent of about $350 million (in today’s money) and probably more considering the weights of the carrying vessels.[iv] Using calculations based on the weights of gold and silver carried, I have determined the total to be in excess of $530 million—and that is for coinage alone, not to mention the works of art, tableware, and such.[v] Plutarch even tells us that the spoils from Paulus’s campaign provided so much income that no special taxes were levied until the time of the first war between Mark Antony and Octavian, well over 100 years later.
Therefore, from the Senate’s point of view, why not make a public statement about the value of this influx and how it was a good way to fund state affairs? To me, the main reasons for the triumph throughout its history were political and economic, pure and simple. War—that is successful war—equaled fortune. It opened up trade routes and gave easy access to raw materials and precious goods from distant countries, thereby increasing the standard of living. And the Romans’ persistence and resilience had proven they were good at war. It made ultimate sense.
Were there other reasons? Maybe, but they had more to do with the messages to be delivered to the spectators. A spectacle or event is only successful if the message delivered is clearly received by observers. This seems to be where scholars have failed to understand the difference between the reason for an event and the message to be delivered by an event.
In considering the design of the triumph—which we will do in detail in the next post—I believe that there were two primary messages delivered by the event, both connected to the reason. The first was that the triumphator, the victorious general, was a hero in the classical sense who brought glory and riches to the state, all the more to be lionized if he was an upstanding and moral citizen as well. The second was that none of the success of the state’s external campaigns could be possible without the blessings of the main god Jupiter. Even though Roman religion at the time of the Republic was still strongly polytheistic, the focus of the triumph was only on Jupiter.  In effect, the Roman government was saying to their citizens, “The gods have blessed us with riches from war brought to us by an upstanding, god-fearing citizen, so therefore war is good for the state.” To deliver this message successfully, the event had to be designed with great care.

[i] See References for the full accounts from these sources.

[ii] See Lunsford (2004; p. 11).
[iii] Versnel (1970; pp. 356ff.) believes it related to the New Year Festival, the purpose of which was to celebrate the return of the victor who was the bearer of good fortune and brought blessings into the city with him. In other words, it had a religious reason. Payne (1962; pp. 9-12) believes it had two reasons: one was as a political tool that reflected the ideals, emotions, ambitions, and mindset of the Roman people; the other was as an act of propitiation, a gesture to the gods to forgive the crimes of war. This was both political and religious. Kertzer (1988; pp. 29-30) believes it was used as a means to communicate the internal political power structure of Rome, a political reason. Lunsford (2004) believes it depicted how Romans saw themselves and others, in other words a sociological reason. Finally, Beard (2007) basically acknowledges after lengthy analysis that the “why” question is unanswerable.
[iv] Livy states 120 million sesterces. A sestertius was the equivalent of about 2.5 gm of silver. This translates to the $350 million mentioned using today’s value of silver.
[v] Taking the current value of silver at approximately $33.00 per ounce and an ancient Roman talent equating to 32.3 kg of weight, the present-day value of the 750 vessels of silver coin alone would be over $84 million. Based on a gold value approximately $1700 per ounce, the value of the gold coinage and gold bowl on the last day would be about $465 million. Thus the total value of coinage and the single bowl, let alone all other booty, would be over $550 million. No doubt it would probably have approached $1 billion or more. Also, simple calculations based on an assumed time for each wagon or vessel to pass a given point (@ 10 sec each) yields about 2 hours for all the vessels of silver coin to pass and about the same for the 500 wagons to pass. The day’s procession was probably about as long as the first day which would leave another 3 hours or so for the remainder of the booty to pass (i.e. silver bowls, cups, statues, shields, paintings, and models) so there was probably quite a lot that was not officially documented. Although the original sources do not specifically state that the paintings and models depicted all the cities and countries captured, this was a fairly standard ritual in triumphs and I have assumed it here.

Posted by Doug Matthews at 2:00 PM